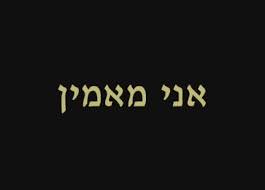 My friend, Dan, was the creative mind that moved me to invite others to present their Principles of Jewish Faith. He is a former Brooklyn Yeshiva bochur, who is a lifelong Jewish learner and deep thinker. I present his thoughts:

Every weekday morning I recite the 13 principles of faith as codified by Maimonides. He being a philosopher where I am not, I imagine his learning and thinking led him to develop these principles as a way of articulating what it was a Jew was to believe. Reduce down to the essence what articles of faith a Jew requires to be a believing Jew. The hard part for me is the formulation in the siddur – “I believe with a complete faith” – I realized I don’t have complete faith.
As a historian I recognize not just his efforts on behalf of Judaism but what he was expressly contra – elements of certainly Christianity but also Islam, both of which would have surrounded him in his Spanish homeland and likely in Egypt of his later years. Historically this makes sense – if one has spent an intellectual life debating the wisdom of the three primary faiths of the medieval world, at a certain point it becomes important to document what it is you actually believe.
As a practicing and believing (mostly) Jew of the current age, it occurred to me that despite the daily repetition my faith is both weak and regularly questioned. Weak in the sense that as I get older I’m less certain of what I believe, and regularly questioned by me as I attempt to wrestle with faith. Outside influences question the faith as well, and while they lead me to challenge my own faith I believe a faith should not be subject to whim or trend, but should withstand social and communal pressures both to discard and to fossilize one’s belief systems.
I’m not looking to eat non-kosher food because “I’ve moved past old rules”; I still believe there was purpose and value to rules like those and without a firm halachic effort to change them, all I’d be doing is satisfying my own desires rather than establishing an acceptable form of Judaism. The rules are the rules – abide by them or don’t, they remain the rules and calling it all by another name doesn’t change it. I view Judaism and the Torah as the will of God, and while the devil is in the details, the essential truth of it remains.
The question must be asked, however – if I’m not completely comfortable with the Rambam’s principles, what do I believe? The low-grade epiphany I had a few days ago was that I need to develop or explore a set of imperfect beliefs – a vision of faith that allows for doubt & questioning without discarding the basic tenets of Judaism. I haven’t studied the Rambam in any depth at all, and perhaps there is flexibility there I’m not aware of, but eventually one has to come up with one’s own list, and this is a draft of mine, with annotations.
1) I believe that God exists
Not by itself revolutionary, or at all different than the Rambam, though he explained it more fully. But this is actually a major effort in a lot of ways for me, because there is no proof. Hints & allegations perhaps, but no proof. There’s no surer test of faith than the idea of believing in something despite the fact that you’ll never get concrete proof. In the world in which I grew up there was plenty of talk about bitachon and “everything is from God” but I’m a concrete person and frankly that isn’t good enough. But I accept at a base level that God exists, and that will have to do.